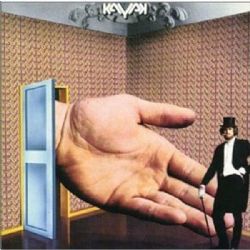 WITH TWO BONUS
TRACKS
BOOKLET WITH
FULLY RESTORED ARTWORK & ESSAY
Esoteric Recordings are pleased to announce a newly
re-mastered edition of the classic self-titled second album by Dutch
Progressive Rock group KAYAK.
KAYAK were formed in Hilversum in Holland in 1972
by keyboard player TON SCHERPENZEEL and drummer PIM KOOPMAN. The band signed to
the Dutch division of EMI’s HARVEST label the same year. Their self-titled
second album was released in 1974 throughout Europe and featured a line-up on
SCHERPENZEEL and KOOPMAN along with MAX WERNER on Vocals and Mellotron, CEES
Van LEEUWEN on Bass and JOHAN SLAGER on Guitars.
This Esoteric Recordings reissue has been newly
re-mastered from the original master tapes, features two bonus tracks taken
from the band’s 1974 UK single, and a booklet that fully restores all original
album artwork with a new essay.

Additional information
Tracklist
1. ALIBI
2. WINTERTIME
3. MOUNTAIN TOO ROUGH
4. THEY GET TO KNOW ME
5. SERENADES
6. WOE AND ALAS
7. MIRIELLE
8. TRUST IN THE MACHINE
9. HIS MASTERS NOISE