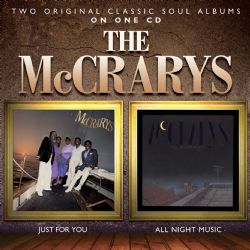 Originally from Youngstown, Ohio, the brother-and-sister group The McCrarys began their career in the gospel field recording their first LP in 1972. However, it was a move into secular music in 1978 that brought the team national prominence in the US when their debut album for Portrait Records, “Loving Is Living” achieved success, in part due to the Top 10 R&B hit, ‘You’ which featured one of their champions, Stevie Wonder. After their label follow-up LP, “On The Other Side,” the group signed a new deal with Capitol Records in 1980.

Consisting of sisters Charity and Linda and brothers Alfred, Howard and Sam, The McCrarys worked with producer/musician Patrick Henderson (whose roots were also in the gospel field). With seven tracks credited to various members of the group as songwriters, JUST FOR YOU included the key cut, ‘Any Ol’ Sunday’ which was recorded by Chaka Khan in 1981.

Teamed with former member of The Crusaders, Wayne Henderson (producer of Ronnie Laws, Esther Phillips, Side Effect and Pleasure among others), the group’s second Capitol LP, ALL NIGHT MUSIC fared better. The track, ‘Love On A Summer Night’ became a Top 100 US R&B hit single and a constant favourite – and now classic – in the UK with ‘smooth groove’fans.

Apart from a limited Japanese pressing of “All Night Music”, both albums are making their worldwide CD debut with this SoulMusic Records reissue, which includes notes by renowned UK writer Charles Waring with 2013 quotes from members of the group.