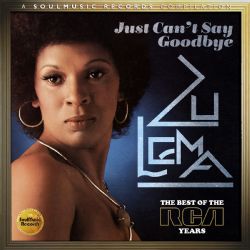 SKU: SMCR5128
Categories: 9.95, Sitewide Sale, SoulMusic Records
Share:
Description
• Zulema Cusseaux (1947-2013) was a multi-talented singer/songwriter/musician and arranger who made a total of six albums between 1972-1978, three of which were released on RCA records. This 2015 Soulmusic Records is a reissue of a 1996 US compilation of her work for the label with one bonus track, ‘Just Can’t Say Goodbye,’ from the soundtrack for 1976 film, “Honey Baby, Honey Baby.”
• Originally a member of the trio, Faith Hope & Charity for almost three years (1968-1971), the Tampa, Florida-born trained pianist’s solo career began at Sussex Records. A much-lauded appearance at the push expo in Chicago in 1972 brought Zulema critical acclaim and in 1974, she signed with RCA.
• “Just Can’t Say Goodbye-The Best Of The RCA Years” includes mostly self-composed tracks from each of Zulema’s three albums – four from her self-titled 1975 label debut (including her version of Michael Jackson’s 1st solo hit, ‘Wanna Be Where You Are,” a top 60 R&B charted single); nine of the ten tracks on her sophomore set, “R.S.V.P.” (including the Leroy Hutson/Donny Hathaway song, ‘You Had To Know’ and Van McCoy’s ‘It Will Never Be The Same Again’);  and four from her final RCA LP, “Suddenly There Was You.”
• After several personally challenging years, Zulema returned to Tampa and was the resident musician at her local church and passed away on September 30, 2013.  This reissue includes original notes from the 1996 compilation and a personal tribute to Zulema by Soulmusic.com founder David Nathan.

N.B This title is released 4th May and will not be dispatched before this date.

Track Listing:
1. STANDING IN THE BACK ROW OF YOUR HEART
2. WANNA BE WHERE YOU ARE
3. NO TIME NEXT TIME
4. LOVE TO LAST FOREVER
5. WHAT KIND OF PERSON ARE YOU (SINGLE EDIT)
6. HALF OF YOUR HEART (SINGLE EDIT)
7. IT WILL NEVER BE THE SAME AGAIN (EDITED VERSION)
8. YOU HAD TO KNOW
9. WHY (DID IT HAVE TO END THIS WAY)?
10. YOU’RE SO EMPTY (A STRONG WIND COULD BLOW YOU AWAY)
11. I’VE GOT NEWS FOR YOU
12. YOUR LOVE HAS BROUGHT ME THAT FAR
13. COINS IN A BOTTLE
14. HERE’S WHERE LOVE BEGINS
15. I LOVE YOU BABY
16. SUDDENLY THERE WAS YOU
17. REMEMBER
18. PITY FOR THE CHILDREN
19. JUST CAN’T SAY GOODBYE (FROM SOUNDTRACK OF HONEY BABY, HONEY BABY)
Additional information
Tracklist
Track listing as above.
Reviews (0)