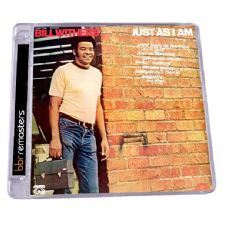 Just As I Am
Bill Withers

SKU: CDBBR0143
Categories: 9.95, Big Break Records, Physical, Sitewide Sale
Share:
Description
Bill Withers’ JUST AS I AM regularly features in many top albums of
all time lists. This is the debut LP 1971 produced by Booker T Jones. It led to
him spending 14 years having regular appearances in the R&B charts most
notably with his #1 hit Lean On Me as well as Use Me, Lovely Day and Just The
Two Of Us.
·

HARLEM is an underground classic and was the original
A-Side release before AIN’T NO SUNSHINE the B-Side received massive attention
and the sides were swapped over for later issues.

AIN’T NO SUNSHINE is a true soul classic that reached
R&B #6 and Pop #3 upon its release and has been covered by an almost
endless list of stars.  It’s an
impressive list including the likes of Nancy Wilson, Grover Washington, Jr.
Michael Jackson, The Temptations, Isaac Hayes, Roy Ayers, Sting and Paul McCartney.

The bluesy GRANDMA’S HANDS reached R&B #18 and
Pop #42 shortly after it’s release. This song will be familiar to all fans of
the R&B #1 hit “No Diggity” by Blackstreet feat Dr Dre and Queen Pen

This
40th anniversary edition will be released in deluxe Super Jewel
cases, with extensive liner notes, JUST AS I AM is a must for all Soul, Folk
and Funk fans out there!

“Just As I Am is consummate Bill Withers: simple, understated, philosophical and funky, with a whole lot of folk stirred into that there soul. Grandma’s Hands feels almost traditional now; Hope She’ll Be Happier still evokes a misty eye; I’m Her Daddy is worth a thousand Families Need Fathers stunts. All delivered by that famous, world weary voice”. 5*