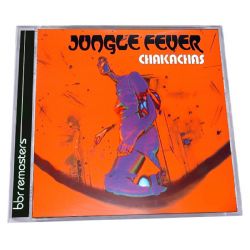 •    Belgian based Latin-soul group THE CHAKACHAS were formed in the 1950s by a group of Latin Soul studio musicians and included the famous Tito Puente’s wife, Kari Kenton on vocals and maracas.

•    CHAKACHAS were no strangers to hits with Eso es el amor, sung in Spanish, hitting #1 on the Belgian charts in 1958 and they got their first taste of UK pop chart action with Twist Twist reaching #48 in 1962.

•    In 1972 CHAKACHAS released their 6th studio album JUNGLE FEVER on Polydor records with the single of the same name becoming a huge success. JUNGLE FEVER climbed all the way to #8 on the US Hot 100 chart and by March of 1972 became certified Gold in the US after selling over one million copies and went on to peak at #29 in the UK where it caused such a stir within the BBC with the heavy breathing and moaning featured in the song that the BBC pulled it from airplay shortly after release.

•    To this day JUNGLE FEVER continues to bring CHAKACHAS notoriety having featured in the movie Boogie Nights and being sampled by numerous artists such as 2 Live Crew, Beatnuts, Public Enemy and Louie Vega as well as being featured on the smash hit Grand Theft Auto computer game franchise.

•    BBR is incredibly excited to present this fully expanded and lovingly re-mastered edition of CHAKACHAS – JUNGLE FEVER. Complete with extensive liner notes and added bonus content this BBR Remaster is a must have for all Latin, Soul, Disco Funk and R&B fans out there!