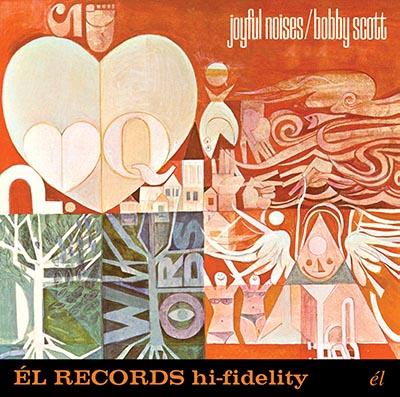 At the dawn of the 1960s, at the age of 25, Bobby Scott looked set to become, on account of his prodigious talents realised at a young age, the Orson Welles of jazz. An enormously fertile musician, a skilled pianist and vibist who also played accordion, clarinet, cello and bass, Scott was also a marvellous singer and an inventive composer / arranger with a broad range of sensibilities. In 1961, the future, for this lean New Yorker, seemed one of unlimited possibility.

• In 1962, the composer of the eternal hits, A Taste of Honey and He Ain’t Heavy, He’s My Brother created the high-concept album Joyful Noises; blending elements of jazz and classical music in a distinctly 20th century manner and with a singular compositional voice. The work was dependent on Scott’s knowledge of the jazz vocabulary, but conditioned by his awareness of music from beyond the jazz sphere; drawing certainly on eclectic tastes doubtless fostered during his apprenticeships with Louis Prima and with the Gene Krupa Jazz Quartet.

• The City, which Bobby Scott composed for saxophonist / leader Larry Elgart, is an intimate set of finely sculpted musical impressions of the composer’s birthplace. Scott comments on the challenges and beauties of the metropolis and on the wild pulse of The City.

• New book from Kevin Pearce just published (Kindle edition). YOU KNOW MY NAME: THE LOVERS, THE DREAMERS and BOBBY SCOTT.

N.B: This title is released 14th August 2015 and will not be dispatched before this date.

3. FOR EVERYTHING A SEASON

8. THE CITY OF WATER

16. DANCE OF GLASS AND STEEL

3. FOR EVERYTHING A SEASON

8. THE CITY OF WATER

16. DANCE OF GLASS AND STEEL