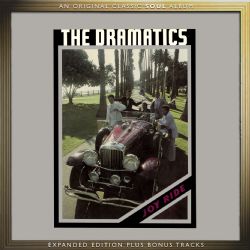 The follow up to the best-selling album “Drama V” (reissued by SoulMusic Records in 2013, SMCR-5104), the 1976 LP JOY RIDE proved to be even more successful for the Detroit-based Dramatics (originally formed in 1962), spawning a US Top 20 chart hit with ‘Finger Fever’ and two US Top 10 R&B hit singles (‘Be My Girl,’ #3 and ‘I Can’t Get Over You,’ #9) both of which became staple tunes in the group’s live performances.

The quintet (by 1976, consisting of L.J. Reynolds, Willie Ford, Ron Banks, Larry “Squirrell” Demps and Lenny Mayes) had established themselves as hitmakers with  classics such as ‘Whatcha See Is Whatcha Get’ and ‘In The Rain’ for Volt Records.

The three primary producers on JOY RIDE had been key players in the group’s previous success – Don Davis, songwriter Tony Hester and key musician/artist in his own right Michael Henderson.  In addition, two members of the group – Ron Banks and L.J. Reynolds – stepped up with each producing one track while longtime arranger Jimmy Roach wrote and produced another standout cut, ‘I Get Carried Away.’  Henderson’s ‘Be My Girl’ quickly became one of the album’s highlights (with his own version competing with the group’s for US airplay) propelling JOY RIDE into the US Top 20 R&B Albums chart.

This SoulMusic Records’ reissue includes two bonus tracks, single versions of ‘Be My Girl’ and ‘Sundown Is Coming’ along with liner notes by renowned US writer Janine Coveney with 2013 quotes from Michael Henderson.