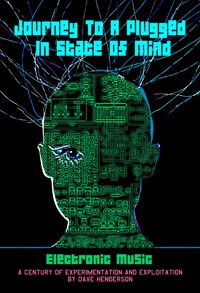 Journey To A Plugged In State Of Mind Electronic Music : 100 Years Of Experimention And Exploitation
Dave Henderson

The story of electronic music and composition has, in recent decades, become a significant musical legacy. Seen by many as a novelty for a long time, the synthesiser and drum machine derived pop of the late 1970s and early 1980s finally landed the squeals and squelches of solder and circuit y in the mainstream, validating an extensive period of painstaking research and experimentation dating back to the late 19th Century. The connect ion between Edgard Varese, La Roux, Brian Eno, The Human League and The Plastic Cow Goes Moo is a complex and solder-heavy one.

A Plugged In State Of Mind explores this long and exhaustive legacy and unearths the greatest albums, experiences and tunes from over a century of electronic sound. From anarchic sound art manifestos of the early 1900s to the three minute radio-friendly hits of the late Twentieth Century, via tape manipulations, WWII surplus gadgetry, synthetic versions of the Beat les and the development and domination of the synthesiser, the sequencer and their descendants which form the basic building blocks of much of the music we listen to today, the history of electronic music is a strange wonderland of cosmic highs and offbeat creativity; a story never less than compelling in its experimentalism and competitiveness.

Key works by familiar early innovators such as Schaeffer, Cage, Stockhausen, Henry and Varese are explored, along with modern envelope pushers such as Aphex Twin and Squarepusher and lesser known unsung heroes and key equipment, such as The IBM 7090 Computer and Digital To Sound Transducer and The CSIRAC Computer.

Key recordings are used as chronological touchstones for the story, and provide the reader with highly recommended entry points into this sometimes challenging universe. The author’s familiar, joyful style also lends a very accessible air to the subj ect . A companion CD set is also scheduled for release around the time of publication, and we anticipate a good deal of press and enthusiasm for a subject that any music fan or enthusiast for human technological development will find intriguing.

Dave Henderson was managing director of Q, Mojo and Kerrang! for ten years. A former Sounds journalist who wrote about everything from Cabaret Voltaire to Can, Depeche Mode to Klaus Schulze, his foray into the history of electronic music has been many years in the making, and the resultant vinyl collection constitutes a legacy to some of the wildest material ever released.