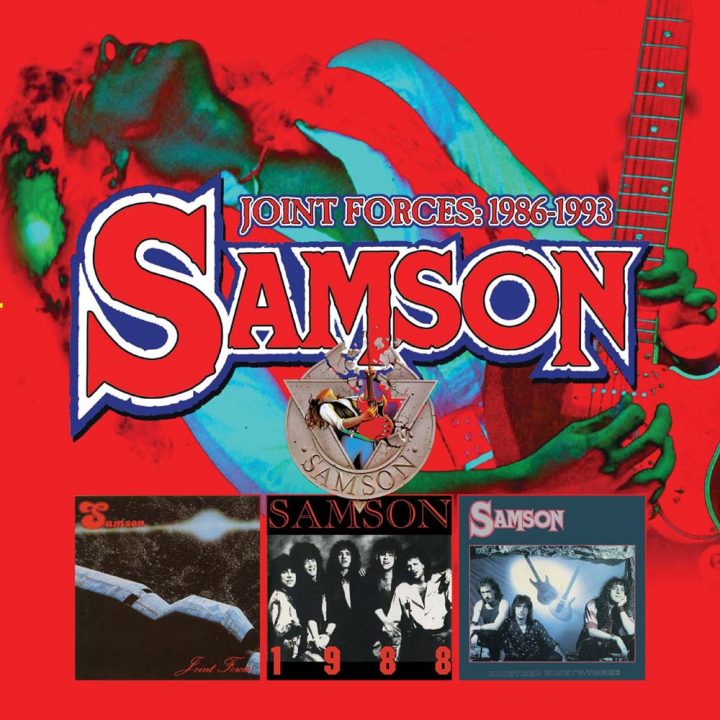 1979 saw the release of their debut, “Survivors”, with John McCoy producing and playing bass, alongside fellow Gillan member Colin Towns on keyboards. The Heavy Metal Crusade” tour, with Samson supported by upcoming London band Iron Maiden as guests, alongside with Saxon, Angelwitch and the Nicky Moore Band, is renowned for being the start of what became known as the New Wave Of British Heavy Metal (or NWOBHM for short). By July 1979, the band expanded to a four piece with the addition of vocalist Bruce Dickinson, then going under the stage name of Bruce Bruce. Over the following two years they released “Head On” and “Shock Tactics” to critical acclaim, touring with Rainbow, Robin Trower and Uriah Heep. Following a triumphant show at the 1981 Reading Festival , Bruce left for global success with Iron Maiden, joining ex-Samson drummer Clive Burr. Dickinson was replaced by ex-Hackensack and Tiger powerhouse vocalist Nicky Moore for a run of albums on Polydor records.

In 1986, Paul released the solo album “Joint Forces”. Though originally intended to be a “supergroup” of former Samson members, featuring Moore, Burr and McCoy, Clive was unable to commit due to contractual obligations, and McCoy was involved with his own band, so after recruiting ex-Sinner drummer Edgar Patrik, along with Moore and McCoy, and with guest appearances from Colin Towns, Rock Goddess, and drummer Chris Sharley, the album was produced by Jo Julian, who had previously worked as tape-op for Phil Spector, as well as producing Samson’s “Before The Storm” album in 1982. The album, mainly written by Samson and Moore, included ‘No Turning Back’, which showed a lighter side to Samson, and was released as a single. McCoy and Moore left to form Mammoth, whilst Paul formed Paul Samson’s Empire to promote “Joint Forces”, including shows opening for Iron Maiden on their 1986 UK “Somewhere On Tour”.

For his next project, Paul retained Empire vocalist Mick White, and recruited Toby Sadler on keyboards (ex-Airrace with Jason Bonham), Dave Boyce on bass (ex-Ore), and Charlie Mac on drums (ex-Emerson). Paul decided to go back to using the name Samson for this band, with a younger image, the band followed a much more commercial direction. The original release was a five track mini-album titled “And There It Is”, but when the mini-album was given a CD release in 1993 retitled “1988”, Paul added six previously unreleased tracks from that period .

Subsequently, Paul decided that he was ready to go back to a trio and return to lead vocals, reforming the 1977 band with Chris Aylmer and Clive Burr, but after Clive joined Praying Mantis, Paul invited Rogues’ drummer Tony Tuohy along to record the self-titled “Samson” album. The material was definitely back to blues-based hard rock. The lyrical subjects were a departure too, reflecting on Paul’s life, friendships, relationships and even the religious fanatics that used to knock at his door. Produced by Paul and Arthur Anderson, this album really captures his guitar sound, probably more so than any other release, and Paul’s voice is ideal for the material, with a solid backing from Chris and Tony. Subsequent reissues saw this album retitled as “Nineteen Ninety Three”.

Paul spent the next few years pursuing his passion for the blues, joining Ten Years After drummer Ric Lee’s Breakers, with ex-Savoy Brown bassist Ian Ellis, playing with such luminaries as Chris Farlowe and Dick Heckstall-Smith, followed by a period in Chicago with the Richard Black Project, before the late 90s brought about a much demanded Samson reformation, which lasted until his sad and untimely death in 2002.