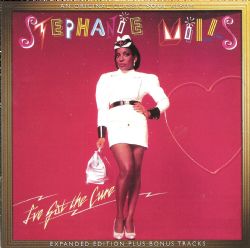 I’ve Got The Cure
Stephanie Mills

By 1984, powerhouse vocalist Stephanie Mills had achieved consistent hit-making status in the U.S. thanks to nine albums and a slew of hit singles that had established the former Broadway star of ‘The Wiz’ as a potent and dynamic recording artist and live performer.

Released in September 1984, I’VE GOT THE CURE, Stephanie’s third (and final) album for Casablanca Records became a best-seller thanks to now-classic soul and dance smash and club favourite, ‘The Medicine Song’ which became a Top 30 UK hit and a Top 10 US R&B hit.

Produced by master musician and funk meister George Duke with additional production by David ‘Hawk’ Wolinski (formerly of the group Rufus), I’VE GOT THE CURE fused the techno-funk rhythms of the day with Stephanie’s high-energy vocals.

This SoulMusic Records’ expanded edition includes three bonus tracks including a six-minute-plus Mark Berry 12” mix of ‘The Medicine Song.’ Other standouts on the album (a Top 10 R&B album in the US) include ‘Edge Of The Razor,’ ‘Rough Trade’ and the highlight ballads ‘Give It Half A Chance’ and ‘Everlasting Love.’