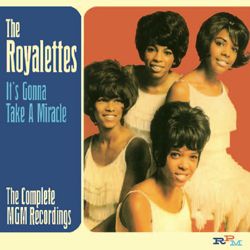 Released on  27/09/10. The Royalettes were one of the classiest American girl groups of the mid-sixties.

This CD for the first time offers their entire recorded output for MGM, issued across 1965 and 1966.

The thirty tracks include two whole albums plus three non-album singles/B-sides. It’s Gonna Take A Miracle was The Royalettes biggest hit, charting on both the U.S. Hot 100 and R&B charts (it was later a smash for both Laura Nyro and Deniece Williams).

Hailing from Baltimore, Maryland, the quartet consisted of Sheila Ross, her sister Anita, Veronica Brown and Terry Flippen. They performed in the Big Town girl sound style similar to The Chantels and Orlons.