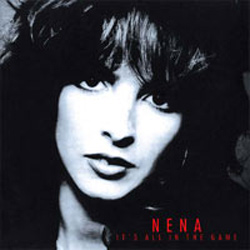 It’s All In The Game
Nena

SKU: CRPOP7
Categories: 9.95, Cherry Pop, Cherry Pop Sale, Physical, Sitewide Sale
Share:
Description
When originally released in late 1985, Nena – the band and the singer – were riding high after the international success of the memorable No.2 hit single ’99 Red Balloons’, which is included here in remixed form.
This album was the English language version of Nena’s “Feuer und Flamme”, and was released in late 1985 – their only full-length English language album. Features the single ‘It’s All In The Game’, the album’s title-track, which was the only English single to be released. This album was the follow up to their international compilation “99 Luftballons”. This album compiled songs from their first two German LP’s, though five songs had been translated to English. As well as extensive liner notes, this release also includes the bonus of four additional tracks, which have never issued on CD in the UK before.
Additional information
Tracklist