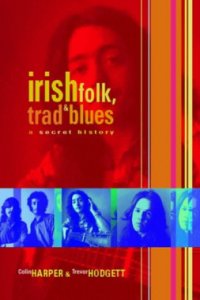 A browse in any music store reveals extensive collections of Irish folk, trad & blues. It is hard to imagine a time when it was otherwise, when musicians rarely had their work committed to any kind of disc. But great pioneers, groundbreakers, lived when the media and recording industry showed scant interest. Accounts of their lives and music survived through reminiscences and good fortune

This fascinating history reveals the frustrations and truimphs of trail-blazers before the Irish music industry, and acts like U2 existed. Forgotten heroes and latter day legends interwine with honorary visitors, who took a bit of Ireland with them, like Bob Dylan and Arlo Guthrie

But the main thrust of the book concerns the influence of homegrown pioneers from Sweeney’s Men in the 1960’s to Horslips, De Danann, Rory Gallagher and current groundbreakers like Martin Hayes. All are given their place in the sun. And, rescued from the shadow of Van, the further and long-lingering adventures of Them are finally revealed. Somewhere in between, the shadowy yet almost seminal influences of figures like Anne Briggs (Christy Moore’s inspiration) are disclosed.