Return to previous page
View cart “Kapt. Kopter And The (Fabulous) Twirly BirdsRandy California” has been added to your cart. 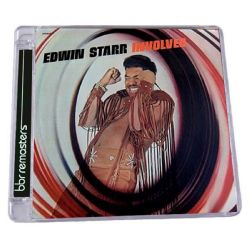 •    EDWIN STARR hailed from Nashville, Tennessee and is best remembered for his rasping Vietnam protest song ‘War’ from 1970. After a stint as vocalist for Bill Doggett’s touring band Starr was able to secure a solo recording deal with Detroit’s Ric-Tic Records in 1965 and immediately gained chart success with his self-penned hit ‘Agent Double-O-Soul’ (R&B #8/Pop #21). More Ric-Tic hits followed before Berry Gordy bought out Starr’s contract in 1967 and took him and his music to the fabled Motown imprint, making the James Brown and Stax influenced singer the rawest vocalist on the celebrated label.

•    INVOLVED was Starr’s fifth LP for the Gordy imprint on Motown Records and was released in 1971. Reaching #45 R&B and a respectable #178 Pop INVOLVED was guided by legendary Motown producer Norman Whitfield who, along with song writing partner Barrett Strong, contributed the majority of the cuts on this album. Whitfield has both Starr and the session musicians playing as hard and explosive as he can, marking this album out as one of the rawest recordings ever released under the Motown banner.

•    Opening track ‘War’ is regarded as one of Motown’s most famous tracks having shot to #1 Pop and #3 R&B in 1970. ‘War’ was Whitfield and Strong’s Vietnam War protest song and struck a deep chord with the American public and has had a ubiquitous appeal ever since with its multiple movie soundtrack appearances and hip-hop samples. Starr’s intense, incendiary vocal on ‘War,’ allied with the lyrical content helped the song become an anthem of the anti-war movement. ‘Stop The War Now’ (R&B #5/Pop #26) was the follow up single and packs the same lyrical and musical punch as ‘War’ despite not gaining the same success. ‘Ball Of Confusion,’ ‘Funky Music Sho’ Nuff Turns Me On’ (R&B #6/Pop #64) and ‘Cloud Nine’ complete the Whitfield/Strong tracks on the album which had all been previously recorded by The Temptations (with the exception of ‘Stop The War Now’) when Whitfield reinvented the vocal group as a psychedelic soul act. The remaining three tracks on the album are superb renditions of Sly & The Family Stone’s ‘Stand,’ Smokey Robinson’s ‘Way Over There’ and George Harrison’s ‘My Sweet Lord.’

•    BBR is very proud to present INVOLVED, expertly remastered and complete with extensive liner notes and bonus tracks making it essential listening for all R&B, Soul and Funk fans out there!

13.    BALL OF CONFUSION (THAT’S WHAT THE WORLD IS TODAY) (Single Version)