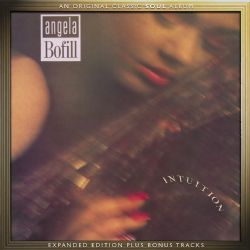 After a seven-year, seven-album tenure with Arista Records (from 1978-1985) – which started with the release of her GRP album Angie (reissued by SoulMusic Records in 2012, SMCR-5039) – renowned singer / songwriter Angela Bofill took a three-year hiatus from recording, moving to Northern California as a then- newly wed with a new born daughter. In 1988, she was eager to step back into the studio: the result was INTUITION, her sole album for Capitol Records.

The Bronx, New York-born artist worked with two primary producers for the project, musician and recording artist in his own right Norman Connors and Vincent Brantley, fresh from hits with such ’80s hitmakers as New Edition and Klymaxx. Bofill also produced two tracks herself, the self-penned composition ‘Love Overtime’ and ‘Fragile, Handle With Care,’ written by Robbie Nevil and Siedah Garrett.

The sessions with Connors included a remake of the 1978 Gino Vanelli hit ‘I Just Wanna Stop’ which became the album’s key single (reaching No. 11 on the U.S. R&B charts) as well as ‘For You And I,’ a standout ballad duet with Peabo Bryson. Highlights among Brantley’s tracks were ‘Love Is In Your Eyes’ (a personal Bofill favourite) and ‘Everlasting Love.’