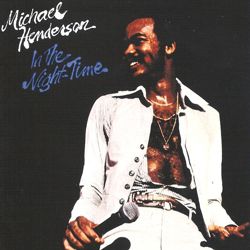 In The Night-Time
Michael Henderson

You don’t get to play with someone like Miles Davis for six years unless
you really can hold your own. And bassist Michael Henderson did just that,
working with the jazz great from 1970 until ’76, recording some great music in
the process.

Henderson recorded and toured with a plethora of legends, including
Aretha Franklin, Stevie Wonder, The Temptations and Marvin Gaye. He was one of
the most in demand bassist on the Motown roster. It was with Miles Davis that
Henderson got the chance to really stretch out, proving himself to be among the
most adept musicians in the world.

Henderson had left the Davis
domain and the same year become involved with producer/drummer Norman Connors’
album ‘Saturday Night Special’; he was the featured vocalist on the hit ‘You
Are My Starship’.All of this gave Henderson the reputation and confidence to
set out on his own. It was to prove a very successful journey, as the man piled
up a collection of hit singles and albums.

Take Me I'm Yours / We Can Go On / Happy/ In The Night-Time / Whisper In My Ear / Am I Special / Yours Truly, Discreet Identity / One To One