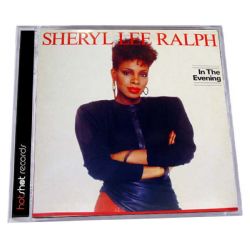 SHERYL LEE RALPH is a very successful actress, singer and philanthropist who has appeared in many Broadway musicals, Hollywood films and television shows since the beginning of the 1980’s. Ralph first came to prominence having created the role of Deena Jones in the incredibly successful and award winning Broadway musical Dreamgirls for which she was nominated as Best Actress  at the 1982 Tony Awards.  This role was recently reprised on the silver screen by Jennifer Hudson who won an Oscar for her efforts.  Ralph has since secured both Tony and Drama Desk best Actress awards for her performances in subsequent Broadway shows.

As a result of the success of Dreamgirls Ralph ventured into the recording studio in 1984 to provide us with her acclaimed debut album IN THE EVENING. Produced by Trevor Lawrence (I’m So Excited) , IN THE EVENING immediately struck a chord with the U.S. music buying public who helped the title track and lead single peak at #6 on the Billboard Dance charts.

The title track ‘In The Evening’ is a full on 80’s dancer with a solid and smooth synthesized rhythm section which pins down the groove, and the obligatory electric lead guitar which adds a grittier night time vibe to the track, allowing Ralph’s vocal to shake off the daily trials of big city life and lead us to where she feels most alive… in the evening. The second single to be lifted from the album, ‘You’re So Romantic’ (R&B #84) is another dancer and picks the pace up from ‘In The Evening.’ Again the smooth synthesized rhythms are in evidence, this time with a very Latin tinged horn line that drives the track while Ralph pines for the attention of her lover. Other notable tracks are the mid-tempo groove ‘Ready Or Not’ with its bubbling bass line and anthemic chorus, and the beautiful, piano led ballad ‘I’m So Glad That We’ve Met.’

Hot Shot Records/BBR is proud to present IN THE EVENING. This expanded and re-mastered edition comes complete with extensive liner notes that feature an interview with Trevor Lawrence and added bonus material.

This Hot Shot Records/BBR remaster is a must have for all Eighties R&B, Soul, Dance and Pop fans out there!