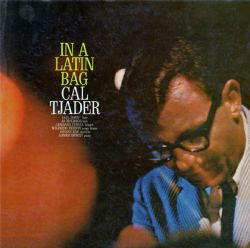 In a Latin Bag
Cal Tjader

SKU: ACMEM266CD
Categories: 9.95, El, El Records Sale, El! Christmas Sale, Physical, Sitewide Sale
Share:
Description
• Callen Radcliffe Tjader Junior is one of the leading exponents of music which owes as much to jazz as it does to Latin-America. On record he is seldom heard without a rhythm section containing bongo or congo drums while his knowledge of the intricate south-of-the-border rhythms is something of a legend.
• This edition combines two fine Tjader albums that have been out of print for more than half a century. The 1961 set, IN A LATIN BAG, Tjader’s debut album for Verve was produced by Creed Taylor and features Armando Peraza on bongos, Paul Horn on flute, Al McKibbon on bass, Wilfredo Vicente on congas, Johnny Rae on timbales and Lonnie Hewitt on piano. The material represents both edges of the Tjader blade. Pauneto’s Point, Davito and Mambo in Miami are straightforward Latin vehicles, Green Dolphin Street, Speak Low and Misty are favourite jazz pieces, Paul Horn’s Ecstasy and Half and Half are essentially jazz compositions that sound right with a Latin rhythm section, while Theme from Ben-Hur and Triste are mood pieces that defy categorisation.
• The second part of our presentation is the live recording CAL TJADER – SATURDAY NIGHT, SUNDAY NIGHT AT THE BLACKHAWK, recorded at The Blackhawk Cafe in San Francisco over a weekend in late January 1962. Here Tjader, Hewitt and Rae are augmented by the young bassist Freddy Schreiber. This collection points up most aspects of Tjader’s musical philosophy, from his identification with contemporary jazz (Benny Golson’s Stablemates), and interest in new material (Gary McFarland’s Weep), to his regard for the past (Stompin’ at the Savoy) and affection for superior show tunes (Summertime). Cal’s ability to stimulate his colleagues into new creative directions can be deduced, too, from Freddy Schreiber’s Fred’s Ahead and Lonnie Hewitt’s Noonie’s Groove, while the leader’s own compositional skill is represented by the characteristically melodic 222 Time.
Available 17/03/2014
Additional information
Tracklist
IN A LATIN BAG SATURDAY NIGHT, SUNDAY NIGHT AT THE BLACKHAWK, SAN FRANCISCO
1. THEME FROM BEN-HUR 11. SUMMERTIME
2. DAVITO         12. 222 TIME
3. GREEN DOLPHIN STREET 13. NOONIE'S GROOVE
4. PAUNETO'S POINT 14. THIS CAN'T BE LOVE
5. SPEAK LOW         15. STABLEMATES
6. TRISTE         16. WEEP
7. MISTY         17. FRED'S AHEAD
8. MAMBO IN MIAMI 18. STOMPIN' AT THE SAVOY
9. ECSTASY
10. HALF AND HALF
Reviews (0)