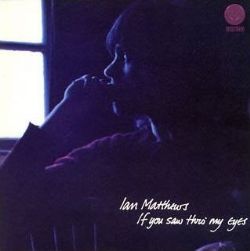 If You Saw Thro’ My Eyes
Ian Matthews

SKU: ECLEC2360
Categories: 10.95, Esoteric Recordings, Esoteric Sale, Physical, Sitewide Sale
Share:
Description
·
NEWLY
REMASTERED EDITION OF THE CLASSIC 1971 DEBUT SOLO ALBUM BY IAN MATTHEWS
·
FEATURING
SANDY DENNY, RICHARD THOMPSON, ANDY ROBERTS, TIM RENWICK & GERRY CONWAY
·
BOOKLET WITH
FULLY RESTORED ARTWORK & NEW ESSAY
Esoteric Recordings are pleased to announce a newly
re-mastered edition of the classic debut solo album by IAN MATTHEWS. He first
came to prominence as a member of FAIRPORT CONVENTION, appearing on the band’s
first two albums. In 1969 he formed MATTHEWS SOUTHERN COMFORT, recording three
classic albums and releasing a version of Joni Mitchell’s ‘Woodstock’ which
topped the UK charts and was a global hit, before embarking on a solo career.
“IF YOU SAW THRO’ MY EYES” was his acclaimed solo
debut, seeing Matthews enlist the assistance of former Fairport band mates
RICHARD THOMPSON and SANDY DENNY (who played Harmonium and Piano and and a duet
on “Thro’ My Eyes”) and fine musicians such as TIM RENWICK, ANDY ROBERTS and
GERRY CONWAY.
Featuring the classics ‘Thro’ My Eyes’ and ‘Little
Known’, this Esoteric Recordings reissue has been newly re-mastered from the
original master tapes and features a booklet that fully restores all original
album artwork with a new essay.