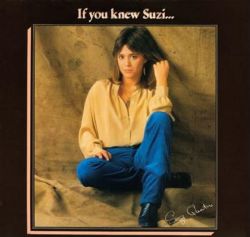 If You Knew Suzi…
Suzi Quatro

Also features the German No.35 hit ‘Don’t Change My Luck’

Three bonus tracks have been added including the previously non LP / non CD “Cream Dream” and an ultra-rare version of Bruce Springsteen’s ‘Born To Run’. Also includes as a bonus an alternative version of ‘Wiser Than You’, previously only available on the Belgian issue of the ‘Don’t Change My Luck’ 45

Booklet includes original LP artwork, lyrics, liner notes plus pictures of all relevant single sleeves · Still touring and recording to this day Suzi remains one of the most consistent sellers on the 7T’s label on which nearly all of her back catalogue is available

2014 will see Suzi celebrating 50 years in the music industry and Cherry Red / 7T’s will be releasing a career covering 4CD Box Set.