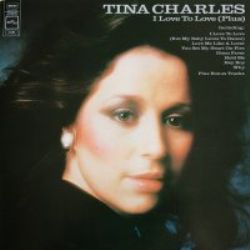 I Love To Love (Plus)
Tina Charles

All produced by Biddu, Charles also released two LPs in the same year, and became a massive artist in Europe. Today Charles has just scored her highest chart hit in the US with a national Billboard top 5 , Higher – Sanny X feat. Tina Charles, in May 2006. This has raised her profile again, although she has always retained a large and very loyal following.
For our album we wanted to show part of the progression Charles went through in reaching that no.1 position. We begin with a 15 year old and her first single releases for CBS Records in 1969. It is a happy note that although the single didn’t move the public so much back then over the years one of the tracks, a b-side as ever, Rich Girl has gone on to become a huge club favourite.
Following this Charles established herself as an accomplished entertainer and session singer, learning her craft. We’ve included some session highlights, songs she recorded for BWD Productions that were released on the famous Hot Hits series. Band of Gold and Stoney End were the songs, amongst many, Charles also sang as special guest on the 1970 BBC TV series of The Two Ronnies. You Can Do Magic and Smarty Pants are moving with the times as pop moves into disco, and leading Charles into the territory where she would really make her mark.
The breakthrough came in 1975 when producer Tony Eyres used Charles as the voice for his 5,000 Volts project and scored a massive hit with I’m On Fire (to be included on a future RPM release).This helped promote Charles in Europe where the single reached no.1 in many countries. For 1976 Charles was able to pick up her own solo career again, in the hands of Biddu and a return to CBS. The story is told in the package by fellow CBS and Biddu artist also from 1976, John Howard.
Additional information
Tracklist
In The Middle Of The Day (1969 CBS single A) / Rich Girl (1969 CBS SINGLE B) / Good To Be Alive (1969 CBS Single A) / Same Old Story (1969 CBS Single B) / I Love To Love (But My Baby Just Loves To Dance) / You Set My Heart On Fire (Pt1) / Hey Boy / Take All Of Me / Love Me Like A Lover / Why / Hold Me / Disco Fever / You Set My Heart On Fire (Pt2) / Disco Love
Reviews (0)