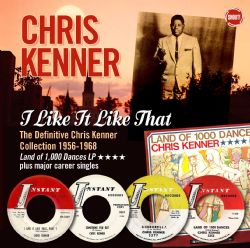 SKU: SHOUT80
Categories: 10.95, Physical, RPM, RPM Sale, Sitewide Sale
Share:
Description
The
song Land of 1000 Dances has become a ‘standard’ across various music
boundaries over the decades, with Wilson Pickett’s high-energy smash hit
version from 1966 perhaps best known, but the original version was by Chris
Kenner from New Orleans, who adapted gospel song ‘Children Go Where I Send You’
into an ear-catching, rhythmic anthem to score a local hit in 1962 on Instant
Records.
Kenner
previously charted in 1961 with ‘I Like It Like That Pt.1 (Instant)’, covered
for international success by UK group the Dave Clark Five in 1965, and some
four years earlier with his original version of ‘Sick and Tired’ on Imperial,
revived in 1958 by label-mate Fats Domino.
The
success of Land of 1000 Dances prompted Atlantic Records to take interest and
release a now very collectable LP gathering together a selection of Kenner’s
Instant singles, with production by Allen Toussaint. Shout Records is pleased
to present a re-issue of this hard-to-find item.
Shout
Records have expanded this collection to include recordings across his career
including tracks from Baton, Imperial and Ron Records, all hard to find now,
and especially the first time on CD and very rare gem ‘Sad Mistake’, making the
compilation “I Like It Like That” a definitive aural study on Chris Kenner.