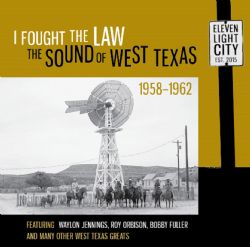 SKU: ELC03
Categories: 9.95, Cherry Red Christmas Sale, Cherry Red Records, Physical, Sitewide Sale
Share:
Description
• THE FIRST EVER RELEASE TO FOCUS ON WHAT HAPPENED IN BUDDY HOLLY’S NATIVE WEST TEXAS IN THE IMMEDIATE AFTERMATH OF HIS DEATH
• FEATURING THE FIRST EFFORTS OF THE LIKES OF WAYLON JENNINGS & BOBBY FULLER NEXT TO CAREER-DEFINING MOMENTS FROM ESTABLISHED CONTEMPORARIES SUCH AS ROY ORBISON & BUDDY KNOX
• 12 PAGE BOOKLET WITH EXTENSIVE NOTES, RARE IMAGES, AND EXCELLENT DESIGN
• MASTERED TO THE HIGHEST STANDARD FROM ORIGINAL SOURCES
In 1957 the landscape of West Texas music was changed forever with the meteoric rise of Buddy Holly. Buddy’s tragic death in early 1959 had a major impact on many of the artists in the region with Waylon Jennings, Buddy’s band The Crickets, and Bobby Fuller, all feeling the passing of West Texas’ most famed musical son.
Other artists that feature on this compilation such as Doo Wop group The Velvets (who signed their first contract with another West Texas great, Roy Orbison, who also features here with two songs that were to be so instrumental in his fledgling success) the more traditional Country Jimmie Dean, harmonica great Delbert McClinton, and Mac Davis and his Pop-orientated material, give us a fuller flavour of what was going on in West Texas music, sans the Holly connection, in the immediate aftermath of Buddy’s death and illustrate, along with the Rock ‘n’ Roll artists, that although the most revered musical figure in the area had died, music itself was very much alive and well.
N.B This title is released 18th May and will not be dispatched before this date.
Track Listing:
1. WHEN SIN STOPS – Waylon Jennings
2. JOLE BLON – Waylon Jennings
3. LOVE’S MADE A FOOL OF YOU  – The Crickets
4. I FOUGHT THE LAW – – The Crickets
5. MORE THAN I CAN SAY  – The Crickets
6. LOVEY DOVEY – Buddy Knox
7. LING TING TONG – Buddy Knox
8. ANOTHER BLUE DAY – Waylon Jennings
9. NEVER AGAIN – Waylon Jennings
10. THAT LUCKY OLD SUN – The Velvets
11. TONIGHT (COULD BE THE NIGHT)  – The Velvets
12. FUNNY HOW TIME SLIPS AWAY – Billy Walker
13. JOEY’S BACK IN TOWN – Billy Walker
14. I WON’T GO HUNTING WITH YOU, JAKE – Jimmie Dean
15. BIG BAD JOHN – Jimmie Dean
16. HEY BABY! – Bruce Channel w/Delbert McClinton
17. GUESS WE’LL FALL IN LOVE – Bobby Fuller
18. YOU’RE IN LOVE – Bobby Fuller
19. DREAM BABY (HOW LONG MUST I DREAM) – Roy Orbison
20. THE CROWD – Roy Orbison
21. I’M A POOR LOSER – Mac Davis
22. LET HIM TRY – Mac Davis
Additional information
Tracklist
Track listing as above.
Reviews (0)