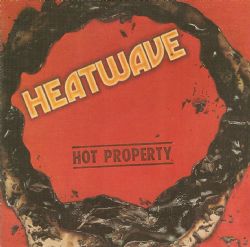 During their most commercially successful years, Heatwave were a band that crossed many borders, laying claim to such international hits as Boogie Nights , Gangsters Of The Groove, Too Hot To Handle, The Groove Line and Always And Forever, all having a huge impact on both sides of the Atlantic. The members of Heatwave hailed from all over the Globe, making this group a truly international act in every sense and contributing to their unique and highly influential sound.

Having already enjoyed great success with their first two albums, 1979 saw the release of Heatwave’s third Top Twenty R&B album Hot Property. With Rod Temperton about to provide his contributions to Michael Jackson’s Off The Wall, he continued to write songs for Heatwave under the production of Phil Ramone. Ramone had already worked with artists such as Barbara Streisand, Burt Bacharach and Paul Simon, picking up where Barry Blue left off and helping Heatwave attain another Gold selling album in the USA.

The first USA single Eyeballin returned Heatwave to the US R&B top 30. British audiences were treated to the laid back groove of the hit Razzle Dazzle. BBR is proud to introduce this newly re-mastered edition featuring extensive liner notes with interviews from the band members and added bonus content including the fan favourite Birthday, a non-LP B-side