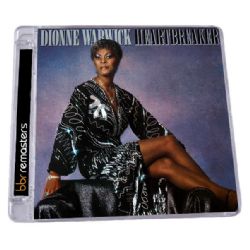 SKU: CDBBR0188
Categories: 9.95, Big Break Records, Physical, Sitewide Sale
Share:
Description
Dionne Warwick
is a legendary American vocalist, she’s also Whitney Houston’s cousin.
Throughout her career she’s released over fifty albums, won five Grammy’s and
been nominated for a further seven as well as getting over thirty top 40
R&B hits.
HEARTBREAKER
was released in 1982 by Arista. The majority of the tracks are penned by Barry
Gibb plus the late Maurice Gibb and Robin Gibb. This peaked at #13 in the
R&B chart, #25 Pop and #3 in the UK. It was her most successful album since
the sixties.
HEARTBREAKER
was a massive hit in the US gaining Dionne the #1 spot in the Adult
Contemporary chart as well as Pop #10, and R&B #14 and # 2 in the UK. Barry
Gibb appears as a backing vocalist on this recording and the song was covered
by the Bee Gees in 2001.
TAKE THE SHORT
WAY HOME reached #5 in the Adult Contemporary chart, as well as Pop #41 and
R&B #43
ALL THE LOVE
IN THE WORLD was the third single from HEARTBREAKER. It gained Dionne the #16
position in the Adult Contemporary and # 6 in the UK. YOURS was released as a
single in the UK and reached #66 in the charts.
Released in deluxe Super Jewel cases,
HEARTBREAKER is a must for all Soul and Disco fans out there!