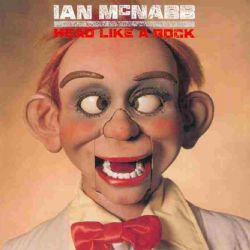 Robert
Ian McNabb is an acclaimed English singer-songwriter and musician
from Liverpool, England. He is known both for his work as leader and
songwriter-in-chief of The Icicle Works in the 1980s, and his critically acclaimed solo career
throughout from the early 1990s to date. He has also played with musicians as
diverse as Ringo Starr, Crazy Horse, Mike Scott (of The Waterboys), and Danny Thompson of folk legends Pentangle.
After the Icicle works split up Ian went solo and signed
for Andrew Lauders This Way Up Label after releasing the well-received Truth and Beauty McNabb was allegedly
inspired to a rockier sound by the engineer who mastered that record, telling
him “Aye, Ian, your rocking days are behind you.” Legend has it that
McNabb went back to his home in Liverpool, and recorded a demo of what would
become the coruscating opener of Head
Like a Rock, “Fire inside My Soul”.

Label boss Andrew Lauder then suggested that McNabb
go to record in America, which McNabb was sceptical about. He facetiously
suggested to Lauder that his new material sounded like Neil Young and Crazy Horse, and if Lauder could get Crazy Horse to play on the record, he would go
to America. A few phone calls later, McNabb found himself in a Los
Angeles studio with Crazy Horse drummer Ralph Molina and bassist Billy Talbot. This cast-iron rhythm section appeared on four of the ten tracks on
Head like a Rock, including the No. 54 UK hit “You Must Be
Prepared to Dream”. The album’s other single, “Go into the
Light”, did not feature Crazy Horse and peaked at UK No. 66.
Head like a Rock was
subsequently nominated for the 1994 Mercury
Music Prize, and although M People would end
up taking the award home, the attendant publicity surrounding the
award-nominated album propelled Head
like a Rock into the UK album
charts, where it peaked at No. 29.

This expanded version has been re-mastered by Ian
himself and is a testament to the great album it was, enhanced with upgraded
packaging and a bonus disc of the B-sides that came with the assorted singles
this is a great addition to the canon of Ian’s work