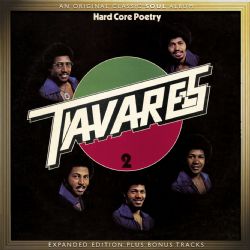 After the brothers Tavares (Ralph, Pooch, Chubby, Butch and Tiny) signed to Capitol Records in 1974, they experienced immediate success with their debut LP, Check It Out. However, it was the follow-up, the much-treasured HARD CORE POETRY that set the group up for a row of hits that established them as solid hit-makers.

The album also included two other major hits for Tavares, the uptempo ‘Too Late’ (No. 10 R&B) and ‘Remember What I Told You To Forget’ (No. 4 R&B/No. 25 pop), a song that had originally been cut by The Four Tops. The flipside of that single, ‘My Ship’ also achieved significant club airplay reaching No. 13 on Billboard’s disco charts.