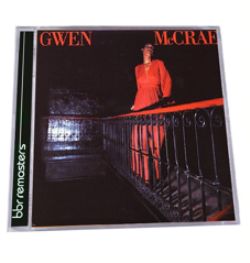 •    Gwen McCrae, a gutsy soul singer in the southern style and initially influenced by such leading lights of the soul world as Sam Cooke and Aretha Franklin, is known best for her 1975 R&B #1 ‘Rockin’ Chair’. Having married George ‘”Rock Your Baby” McCrae after a whirlwind romance in 1963 the couple became a vocal duo, ‘George & Gwen’ and were discovered by influential singer/producer Betty Wright in the late 60’s while performing extensively throughout South Florida. Betty Wright was able to help them get a recording deal at Henry Stones Alston imprint which led to a move to Columbia Records before going back to a different Henry Stone imprint, Cat. A succession of singles were released during this period with modest success until she hit the R&B #1 spot with the aforementioned ‘Rockin’ Chair’ in 1975 and followed it up with her debut LP of the same name. Gwen recorded several more albums for the Cat imprint with reasonable R&B chart success before teaming up again with Betty Wright who produced her final LP for the label, “Melody Of Life” (BBRCD0227), in 1979 before moving on to Atlantic Records.

•    GWEN McCRAE was the first of the singers 2 offerings for Atlantic and was released in 1981 to high acclaim. Opening track ‘Funky Sensation’ (R&B #22/Disco #15), penned and produced by Kenton Nix, as was the rest of the album, is a bone-fide dance classic despite its mid tempo pace. The funky, solid beat and infectious piano and bass groove grip you from the start before McCrae’s unmistakeable raspy soulful tones direct you to the floor and ask you if you can feel her “Funky Sensation” while the low strings and chopping guitar hold you in the groove before the horns complete the picture. As she so aptly states we “ain’t never had no funk like this before,” this is true dance floor dynamite. The same is essentially true for the follow up single ‘Poyson,’ another mid-tempo super solid funk groove that just won’t let go as each element comes together to create a fever with McCrae’s incendiary vocals on top, there’s no doubt this ‘Poyson’ gets in your veins. Other great tracks on this superb offering are the more soulful, uptempo ‘Have A Good Time’ and the excellent ‘Feel So Good.’

•    BBR is also proud to present a previously unreleased extended remix of the classic FUNKY SENSATION from 1981. This expanded and remastered edition of GWEN McCRAE comes complete with extensive liner notes, a new interview with Gwen McCrae and added bonus material. It is a must have for all Funk, Soul, R&B and Disco fans out there!