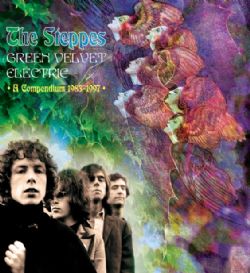 Born amidst the hype
of the ‘Paisley Underground’ in LA in the early 1980s the Steppes were always
the real deal, yet received less attention than lesser contemporaries such as
The Rain Parade and Long Ryders. In the main a vehicle for the songs of the
Irish American Fallon brothers, the Steppes earliest recordings received praise
in Melody Maker who made comparisons with The Beatles and The Jam. By 1986 the
band had achieved its classic line up; John and Dave Fallon were augmented by
the ‘John Cippolina meets Jimmy Page’ guitar work of Tim Gilman and ‘John
Densmore vibed’ drumming of Jim Bailey.

In 1986 this truly
psychedelic quartet unleashed the timeless ‘drop of The Creature’ an album
described by The Times in 1997 as “one of the greatest debuts ever”. An innovative
mixture of trippy, fluid, west-coast acid rock, folky-Celtic romanticism and
sharply observant pop-psychedelia, ‘Drop’ set a template that the band improved
upon right up until their untimely demise in the midst of the acid house
explosion – when playing a guitar was momentarily deemed unhip by the fickle
masters of cool. The Steppes sound is as catchy as it is hallucinogenic and
between 1983 and 1997 they recorded an astonishing body of work including the
albums ‘drop of The Creature’ ‘Stewdio’ ‘Enquire Within’ ‘Harps and Hammers’
and ‘Gods Men and Ghosts’.

The best of this
catalogue can be found on this two disc set. Both ahead of their time and
outside of it The Steppes legacy is now in focus revealing just what an
important band they really were.