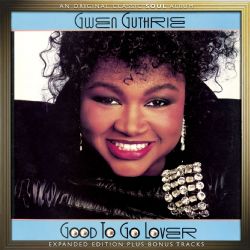 Already established as a songwriter of note (thanks to hits by Ben E. King, Roberta Flack and Angela Bofill) and an in-demand New York City session and jingle singer, Oklahoma-born, New Jersey-raised Gwen Guthrie began her own solo recording career in 1981.

Dubbed ‘The First Lady Of The Paradise Garage”(the popular New York gay club) as a result of her dynamic performances at the venue, dance hits such as 1985’s “Padlock” and work with reggae musicians/producers Sly & Robbie helped establish Gwen as a hit-maker in her own right.

It was with the now-classic dance and soul anthem “Ain’t Nothin’ Goin’ On But The Rent” that Gwen experienced her greatest international success. A No. 1 US R&B and Top 50 pop hit, the track became the centrepiece for GOOD TO GO LOVER, Gwen’s debut album for Polydor Records.

A Top 20 US R&B album, GOOD TO GO LOVER spawned the additional dance/soul hit “Outside In The Rain” and a potent reading of the Bacharach-David classic, “(They Long To Be) Close To You.” Gwen (who passed away at the age of 48 in 1999) herself helmed the production with additional production work from Dave ‘Pic’ Conley of the group Surface (with members of the group also contributing as writers to three songs).

This SoulMusic Records’ expanded edition includes four bonus tracks including a non-album “B” side, “Save Your Love For Me,” a duet with Surface. Includes notes by renowned US writer Justin Kantor with quotes from ‘Pic’ Conley and musician Onaje Allen Gumbs.