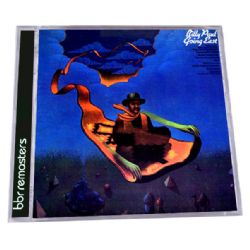 Billy
became known on the local circuit singing in clubs and later around college
campuses all over the country which later led to him performing live with some
of the biggest names in black music of the 60s and 70s including Dinah Washington,
Miles Davis, Nina Simone and Roberta Flack to name a few, he also spent a brief
spell standing in as a ‘Blue Note’ with Harold Melvin & The Blue Notes.
Originally
signed to Kenny Gamble’s Gamble Records, Billy Paul later joined the legendary
Philadelphia International Records, headed by Kenny Gamble and Leon Huff.
This
legendary album was both Philadelphia International Records’ and Billy Paul’s
debut release and was released in 1971. It kick-started
a decade of dominance for the label and created a partnership that would last
almost 20 years and produce a string of hits and awards for all involved.
BBR is
very excited to bring you GOING EAST entirely re-mastered and repackaged
complete with extensive liner notes featuring a brand new interview with BILLY
PAUL and extended bonus content.
GOING EAST
is a must have for all Philly Soul, Funk & Pop fans out there!