Return to previous page
View cart “Boomania: Deluxe EditionBetty Boo” has been added to your cart. 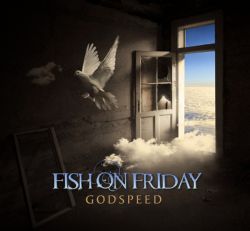 Esoteric Antenna is pleased to announce the release of “GODSPEED”, the new studio album by FISH ON FRIDAY.

The album is the third release by the band who formed in 2009 when Belgian Producer and musician Frank van Bogaert and keyboard player William Beckers established FISH ON FRIDAY as a studio-based Progressive Rock project. The band’s debut album was released in 2010 and saw the band augmented by Californian guitarist Marty Townsend and drummer Marcus Weymaere. The album’s melodic Progressive approach soon drew very favourable critical stylistic comparisons with the progressive side of Alan Parsons Project. The reaction to the group was encouraging enough for them to embark on performing several live shows in Belgium, before embarking on their second album, “Airborne”, which gained a wider audience and sales by receiving airplay on mainstream Belgian radio alongside specialist Progressive Rock stations globally. “Airborne” also featured the virtuoso bass player Nick Beggs (Steven Wilson band, Steve Hackett band, Lifesigns) guesting on one track, an experience that led to Nick officially becoming a member of Fish on Friday for the band’s new (and arguably most Progressive) album “Godspeed”.

This stunning album features a grasp of melody on songs such as ‘Callin’ Planet Home’, ‘Just a Nightmare’, ‘Ghost Song’, ‘Sanctuary’ and the album’s epic ten minute title track. “Godspeed” also features a special guest, Theo Travis, the virtuoso saxophonist and flautist noted for his work with Steven Wilson, Soft Machine Legacy, Robert Fripp, Gong, Bill Nelson et al. All in all “Godspeed” is a Progressive rock album of fine songs, excellent musicianship and is the eagerly anticipated next step in the story of Fish on Friday.