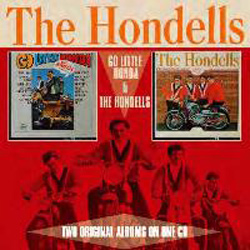 SKU: TBIRD0020CD
Categories: 9.95, Physical, Sitewide Sale, T-Bird Americana
Share:
Description
The story of The Hondells is a story of success, misadventure, mismanagement, friendship and disillusionment…but that’s Rock’n’Roll! The band was the vehicle for Gary Usher, a producer, musician and songwriter, who found fame and his niche during the early 1960s in California. Usher was the first outsider to collaborate with The Beach Boys’ Brian Wilson, co-writing ten songs with him, including ‘In My Room’ and ‘409’. He also produced The Byrds and Sons Of Adam.

Gary initiated The Hondells project, produced the hit singles and the groups two long players and created the sound so synonymous with the name THE HONDELLS.

Go Little Honda produced the band’s biggest hit, ‘Little Honda’ a Beach Boys song, penned by Brian Wilson and Mike Love for their album ‘All Summer Long’, released in ’64. The Beach Boys hadn’t put out their original as a single and noticing how well the cover was doing quickly released it but ironically, it was only a minor hit for the surf legends.The Hondells self-titled follow up (again released in 1964) produced a hit with their version of The Lovin’ Spoonful’s ‘A Younger Girl’, which charted at number 52 in the States.

Their sound and style are most decidedly of their time and there’s a genuine feel of atmosphere and beach party haven here. This is bright, breezy music that is filled with sunshine and petrol fumes, a combination that makes it almost unique. THE HONDELLS have a definite charm and almost innocent creativity.