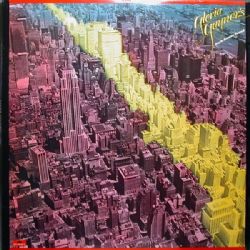 SKU: CDBBR0131
Categories: 9.95, Big Break Records, Physical, Sitewide Sale
Share:
Description
Grammy
Award winner and Hall of Famer, GLORIA GAYNOR was born on the 7th of
September 1949 in Newark, N.J. and sang as young girl in her school choir,
mixed chorus and the her school’s girl glee club. While she knew she one day
wanted to have a career in music, GLORIA GAYNOR still went to school with the
aim of having something to fall back on and studied beauty and business
courses.
In
1965 GLORIA GAYNOR released her first solo single titled She’ll Be Sorry with the B-Side Let
Me Go Baby on Jocida Records. However,
it wasn’t until the 1970’s that Gaynor began to taste real success with the
release of her first two albums, Experience
and Never Can Say Goodbye, (both
available on BBR) that she began to stand out as a unique and recognizable
force on the black music scene.
In
1978 GLORIA GAYNOR released her 5th studio album, PARK AVENUE SOUND on Polydor Records,
now fully remastered and repackaged by BBR!
PARK
AVENUE SOUND features some of the best musicians of the time including Keith E.
Benson on drums, Norman Harris and Grammy Award Winner Bobby Eli on guitar as
well as Grammy Award Winner Ron “Have Mercy” Kersey, who was a member of The
Trammps along with Norman Harris.
While
the album did not produce any chart hits it did produce some extremely popular
club tracks including the single, ‘YOU”RE ALL I NEED TO GET BY’, written by
Motown’s prolific songwriting duo, Ashford & Simpson and more recently the
song was sampled in the Grammy Award winning duet performed by Method Man and
Mary J. Blige on the hit single, ‘I’ll Be There for You/You’re All I Need to
Get By’. Other notable tracks include
the celebrated ‘THIS LOVE AFFAIR’, which was a long-standing rare groove
underground UK hit.
Park
Avenue Sound has since become a cult album for disco and GLORIA GAYNOR fans,
having never been released on CD until now!
BBR
couldn’t be happier to present the release of Gloria Gaynor – Park Avenue
Sound. Lovingly remastered and repackaged complete with extensive liner notes
featuring interviews and added bonus content, this BBR Remaster truly is a must
have for all Disco, Soul, Funk and R&B fans out there!