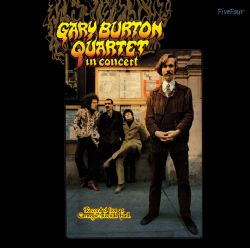 SKU: FIVEFOUR31
Categories: 9.95, FiveFour, Physical, Sitewide Sale
Share:
Description
Previously
released only in Japan on CD, this exceptional live recording originally issued
on RCA in 1968 is one of the peaks of vibraphone virtuoso Gary Burton’s stellar
discography.
Burton’s
Quartet in 1968 (they had been touring and recording for 2 years, performing an
original and popular fusion of jazz, avant-garde, jazz-rock and pop) is one of
the best groups he ever put together : blistering jazz-rock pioneer Larry
Coryell on guitar, lyrical bassist Steve Swallow, and powerful drummer Bobby
Moses.
Gary Burton
Quartet in Concert catches the group live at Carnegie Recital Hall in New York
on February 23, 1968. Works by Michael Gibbs, Coryell, and a striking cover of
Bob Dylan’s ‘I Want You’ are performed along with Burton originals, including
the magical ‘Sunset Bell.’