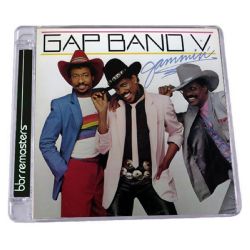 •    THE GAP BAND enjoyed huge success throughout the 70s and 80s with their unique sound and contribution to the Funk scene. Formed in 1967 in their hometown of Tulsa, Oklahoma, brothers Charlie, Ronnie and Robert Wilson first went by the name Greenwood, Archer and Pine Street Band, later shortening the name to THE GAP BAND in 1973. LA Producer, Lonnie Simmons, signed them to his label, Total Experience Records, setting in motion what would be the start of a long and prosperous relationship between THE GAP BAND and Simmons.

•    The first US single released from this album was the fresh, festive, funky dance floor work out, ‘Party Train,’ which reached #3 R&B and #101 Pop, with its infectious groove and call to “…get on board.” Second US single ‘Jam The Motha’ (R&B #16) is another call to the dance floor. Third US single ‘I’m Ready (If You’re Ready)’ (R&B #74) had already been issued as the album’s first UK single, but it was the second UK release that made impact. “Someday” featured a guest appearance by STEVIE WONDER and became their second biggest UK hit to date when it made #17.