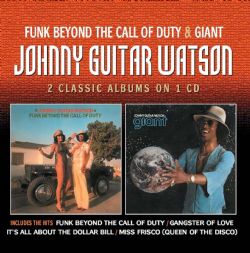 Funk Beyond The Call Of Duty / Giant
Johnny Guitar Watson

Robinsongs and Cherry Red are honoured to be
representing the Legendary Johnny Guitar Watson’s DJM catalogue.

These albums were originally released in 1977 &
1978 respectively.

Jam packed with Funk Anthems including ‘Funk Beyond
The Call Of Duty’, ‘It’s All About The Dollar Bill’, ‘Miss Frisco (Queen Of The
Disco)’ and the updated version of Johnny’s classic ‘Gangster Of Love’.

Having played with the likes of Frank Zappa, Little
Richard, Johnny Otis, Sam Cooke & George Duke, Johnny Guitar Watson
certainly can be described as a Soul/Funk Legend. Johnny made his guitar sound
like no other on earth, Jimi Hendrix clearly took note “Those things Jimi was
doing, I started that shit” Mr Watson once said. And who are we to argue!!