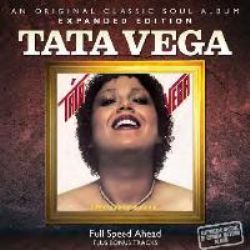 In addition to covers of songs by Stevie Wonder (Never Had A Dream Come True) and Rufus (Keep It Coming, written by Ashford & Simpson), writers involved in FULL SPEED AHEAD included a teenage Teena Marie (Just As Long As There Is You), UK rare groove favourites Michael & Brenda Sutton ( Music In My Heart ) and Tata herself who contributed Try GodCritically acclaimed FULL SPEED AHEAD gained an immediate response among Motown music lovers on both sides of the Atlantic who are thrilled to see this albm making its worldwide CD debut!

Press:-
“It’s hard to imagine a talent like Tata Vega establishing a foothold in the music industry at any other time than the 1970’s. A 5ft nothing, curvy Puerto Rican vocal powerhouse possessed of a startling unique delivery, she certainly would have had a hard time blending into the background of ‘60s girl groups like The Vandellas and Supremes, and would later struggle in the shoulder-padded MTV dominated ‘80s.”
-Adam Mattera / Echoes July 2011