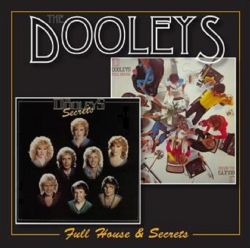 SKU: GLAMCDD144
Categories: 10.95, 7Ts, 7Ts Sale, Physical, Sitewide Sale
Share:
Description
First time on CD for the third and fourth studio albums by
one of the UK’s most successful family based groups, The Dooleys.
“Full House” reached No. 54 in the British album charts and
contained the hit singles ‘Love Patrol’ (No.29), ‘Body Language’ (No.46) and ‘The
Chosen Few’ (No.7) as well as the non-charting ‘In A Riddle.’
‘Secrets’ (released as ‘The Dancer’ in Japan and ‘And I
Wish’ in Germany) contains the UK No.52 hit single ‘And I Wish’ and was
produced by 70’s pop star Barry Blue.
The song ‘Body Language’ hit No. 1 in Japan were it won the
prestigious Tokyo Music Festival – the group were massively successful in Japan.
14 rare B-sides have been added as a bonus, all appearing
on CD for the first time to give a value for money 42 tracks of Pure Pop in a
Dooleys style!
*Booklet contains pictures of all relevant singles sleeves
(including many rare European ones) and detailed liner notes by Phil Hendriks.