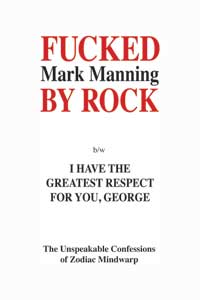 Fucked By Rock (Revisited) The Unimaginable Confessions of Zodiac Mindwarp (and I Have The Greatest Respect For You, George)
Mark Manning

Mark Manning was an everyday Yorkshire poet until, in the early 1980s, he found himself possessed by the spirit of Zodiac Mindwarp, High Priest of Love, International Sex God of Everything and reasonably competent tunesmith. He immediately abandoned life in Leeds and let Zodiac take him on a trip into the deepest, darkest crevices of the rock landscape with his own diabolical pop group The Love Reaction.

Fame, world tours (including those with Guns ‘n’ Roses and Iron Maiden), hit records and angry women inevitably followed, but in the mid nineties, with his mind barely intact, Mark turned to other creative outlets, painting, writing and drawing with alarming ferocity.

In 2001, he published Fucked By Rock , a rock biography of a kind never before seen. The usual platitudes of excess seen through expensive sunglasses were replaced by weird tales of the world’s underbelly, inter-band fireworks fights, tour bus vampires, a road crew who hated the band even more than they hated themselves and the intricacies of Rock Maths. It constituted the most brutally honest critique of rock n roll ever committed to paper and became an instant classic, exploring taboos many had shied away from for decades. The book represented a catharsis for lost souls, tour bus junkies and studio ghosts everywhere, and now sells for between £50 – £100 on the collectors market.

Eventually, as the new millennium progressed, Zed conceived of a prequel to Fucked… , to be named I Have The Greatest Respect For You George. Written in the same ringmaster-cum-casual-observer style, this new work uncovers the weird life of a working class teen poet and rocker in waiting as he grinds his way through the 1970s and all it had to offer. Gay Nazi disco dancers, bloody performance art, pubs bursting with oversized glam rock strippers and the ever present shadow of the worst mother-in-law in the world ever all combine to shape a life clearly destined for greatness. Later, further recollections from Zodiac s prime, and a few more recent tales, found their way to Mark’s pen, and a revised, expanded Fucked By Rock manuscript was prepared. This book brings together the previously unpublished I Have The Greatest Respect For You George and the new, expanded Fucked By Rock.

Mark Manning is the celebrated co-author of the Bad Wisdom trilogy with his friend Bill Drummond, and has had several other titles published, including the infamous novella Get Your Cock Out. He also draws, crashes radio controlled helicopters, sings with the Love Reaction and collaborates with comrades as varied as Youth, Adam Ant, Billy Childish and Jimi Cauty.

His work doesn t seek to pamper friends and reconcile foes everybody is put under the most intimate microscope, and their tales told through Zed’s own half imagined ravings.