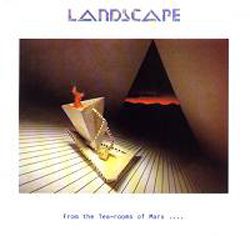 SKU: CDMRED209
Categories: 9.95, Cherry Red Records, Cherry Red Sale, Physical, Sitewide Sale
Share:
Description
A keenly awaited repress of this innovative and timeless album, “From The Tea Rooms Of Mars” by electro pop pioneers, Landscape. Originally released in 1981 on RCA Records, the album enjoyed both commercial and critical success with a string of chart hits. The band’s over-riding achievement was the way technology was used to create such a mainstream but also unusual sound. The CD features the 10 original tracks from the “From The Tea Rooms Of Mars….To The Hell Holes Of Uranus”album including the hit singles ‘Einstein A Go-Go’,‘European Man’ and ‘Norman Bates’ plus the bonus tracks featuring the singles ‘Eastern Girls’, ‘So Good So Pure So Kind’, ‘It’s Not My Name’ and ‘You Know How To Hurt Me’. The CD booklet includes all the original artwork, sleeve notes and a complete discography of the band incorporating some of the band’s original sleeves.