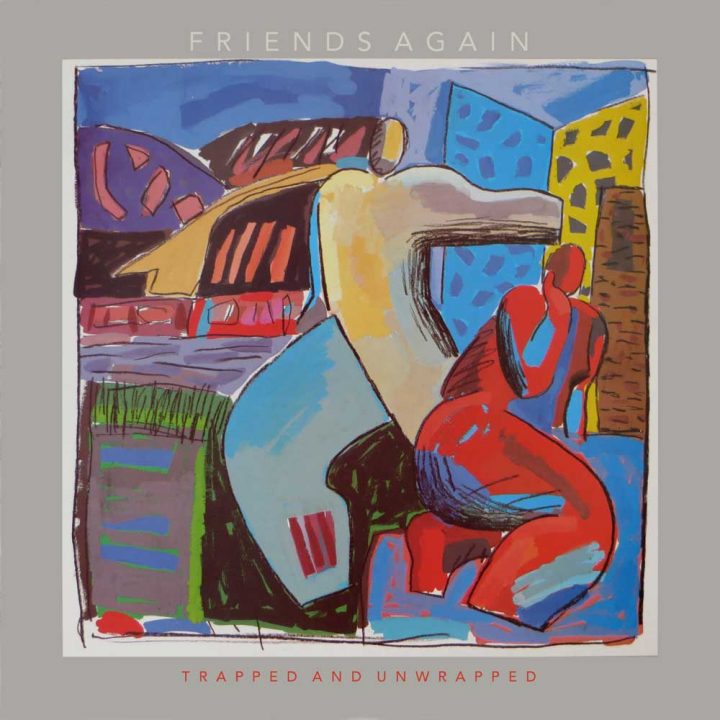 ***PRE-ORDER: STOCK NOT EXPECTED UNTIL JANUARY***

The long overdue and much requested reissue of “Trapped And Unwrapped”, the debut and only album recorded by the 80’s Scottish band, Friends Again.

The long overdue and much requested reissue of “Trapped And Unwrapped”, the debut and only album recorded by the 80’s Scottish band, Friends Again.

Originally released in 1984, this 2 CD collection brings together the original 12 album tracks plus all the related bonus material and the band’s 12” indie single ‘Honey At The Core’ which has not previously been available on CD before. The band have provided from their archives three demos from the period that were previously unreleased.

The band hail from Glasgow and were signed to Phonogram / Mercury Records as part of the new wave of thoughtful pop pioneers that emerged from north of the border in the early 80’s. They released four singles and an EP along with the album over this period, and all are included within what is the most definitive collection of the band’s material available.

They released the following singles during 1984: ‘Sunkissed’, ‘State Of Art’, ‘Honey At The Core’ and ‘South Of Love’. They all feature on this collection including 12” versions, instrumentals and a remix of ‘State Of Art’.

Included is the original indie single versions of ‘Honey At The Core’ and it’s b/side ‘Lucky Star’, that was originally released in 1983 on the band’s own Moonboot Records.

The bulk of the album was produced by Bob Sargeant or by the band but ‘Swallows In The Rain’ saw respected American artist Tom Verlaine at the controls.

This CD release has been made with the full co-operation of the band.

The CD has been re-mastered by Paul McGeechan from the band using the original production masters.

We have used the original artwork and expanded the design to include sleeve notes, a UK Discography, original album track lyrics and additional original promotional material provided by the band.

Reissued on CD for the first time in the UK since 1989.

This collection includes 16 tracks that appear on CD for the first time.

* DENOTES ON CD FOR THE FIRST TIME
# DENOTES PREVIOUSLY UNRELEASED

* DENOTES ON CD FOR THE FIRST TIME
# DENOTES PREVIOUSLY UNRELEASED