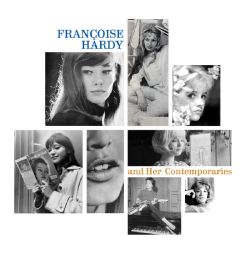 Françoise was just eighteen when she recorded this remarkable collection of (mostly) original songs. The public were captivated by her charm, responding in part to some of the same qualities they had found in the emerging bossa nova; a singular, understated voice, intensity, intelligence, the simplicity and sophistication of the songs.

Here, the original classic album is augmented by Italian versions of these and other songs recorded under the auspices of Ezio Leoni.

In 1963 Hardy was invited to represent Monaco at the Eurovision Song Contest where she performed her own composition, the lovely L’amour S’en va. She came sixth. (Nana Mouskouri and Monica Zetterlund were among the competition and they didn’t win either). She re-visited the UK singles chart in 1965 when her ‘Dans le Monde Entier’ (All Over the World) reached the Top Twenty.

Françoise has been described as “Liz from Billy Liar made real”, “Garbo meets Greco” and “The Epitome of the Modern Woman”. Bob Dylan dedicated a poem to her (At the Seine’s Edge).

“I was for a very long time passionately in love with her, as I’m sure she’s guessed.  Every male in the world, and a number of females also were, and we all still are” David Bowie

“She was the ultimate pin-up of most hip, Chelsea, beat bedroom walls, and I know for a fact, many of the groups who were notorious and slowly becoming successful, such as the Rolling Stones, Brian Jones and Mick Jagger,  the Beatles, John Lennon, Paul McCartney, and many other groups were all desperately interested in having Françoise Hardy become their girlfriend in some way.” Malcolm McLaren