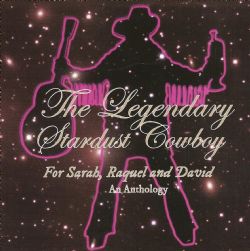 For Sarah, Raquel and David ~An Anthology
Legendary Stardust Cowboy (The)

Since his unique sound was
first captured on tape in 1968, The Legendary Stardust Cowboy has whooped,
riffed and hollered his way through a career spanning six decades on the outer
limits of stardom. Regularly lauded, and even covered, by David Bowie, and a
cult hero amongst those in the know since the late sixties, The Ledge has
recorded and released a series of amazing albums and singles, laying the
foundations for Psychobilly and making numerous interstellar proclamations in
the process. This two disc anthology gathers together the high points and key
tracks from The Ledge’s career, as selected by the artist himself and his
current, long established crop of supporting musicians.

This 2CD set features the
classic early Mercury singles ‘Paralyzed’, ‘I Took A Trip (On A Gemini
Spaceship)’ and ‘Kiss And Run’, extracts from the ‘Rock-It To Stardom’, ‘Retro
Rocket Back To Earth’, ‘Rides Again’ and ‘Tokyo’ albums, a number of 7” only
tracks, and some brand new, previously unissued recordings. The standard is
always sublime, and any fan of the wilder side of Americana won’t fail to be
intrigued. Lazily file under “Outsider Music”, but expect much more from this
true original – a man whose biggest hit, rightly or wrongly, often appears in
lists of the worst recordings ever made, and whose ’61 Chevy Biscayne was once
emblazoned with the legend “NASA Presents: The Legendary Stardust Cowboy”!

The Ledge’s ‘freewheelin’
approach to music often belies his true talent, an unrecognised genius and a
self-belief which is impossible not to fall in love with, all of which this
anthology look to explore. Both Sarah Ferguson and Raquel Welch have expressed
their admiration for his work, and he remains an active live performer, his
band currently boasting Klaus Flouride (Dead Kennedys) on bass.


Additional information
Tracklist
Paralyzed / The Ledge Explains / Who's Knocking On My Door ? / I Took A Trip On A Gemini Spaceship / Down In The Wrecking Yard / Kiss And Run / Everything Sgetting Bigger But Our Love / I Walk A Hot Wind / Crack Of Dawn / My Underwear Froze To The Washing Line / Radar / Standing In A Trashcan (Thinking Of You) / Dynamite / Bladerunner / Geiger Counter / Stealth Cowboy / Credit Card Blues / I Hate Cds / There'll Be Hot Coffee In The Old Bunkhouse / There's magic In Your Eyes / Pahrump, Nevada