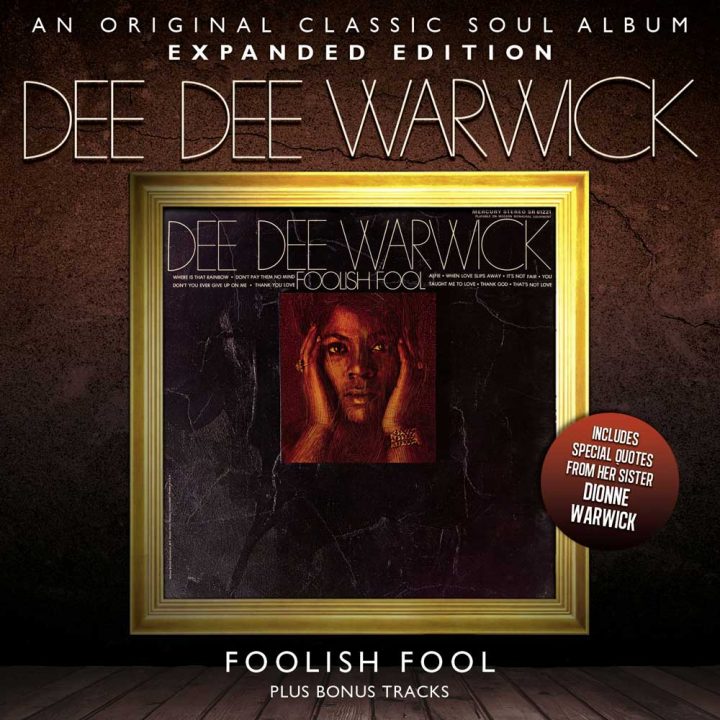 SoulMusic Records is proud to celebrate one of the ‘first families of soul music’ with the 2012 reissue of three titles that reflect the amazing talent of sisters Dee Dee Warwick and Dionne Warwick and their aunt Cissy Houston – via the Isaac Hayes & Dionne Warwick 1977 ‘live’ album A Man & A Woman (SMCR-5055); an expanded edition of Presenting Cissy Houston (SMCR-5054) and this expanded edition of Dee Dee Warwick’s 1969 LP, FOOLISH FOOL.

The younger sister of international music legend Dionne Warwick, Dee Dee Warwick had experienced chart success in the U.S. after she signed with the Blue Rock/Mercury labels in 1965, achieving Top 10 R&B status with ‘I Want To Be With You’ and following it with her original version of the now-classic ‘I’m Gonna Make You Love Me.’

Dee Dee’s next major hit came in 1969 when she reunited with producer Ed Townsend for one of the most emotionally-charged recordings of her career.  ‘Foolish Fool,’ now considered a ‘deep soul’ classic not only became another Top 20 R&B hit but earned the East Orange, New Jersey native her first Grammy nomination. The song was covered by Chaka Khan on a 2007 CD.

In 1969, Mercury assembled the FOOLISH FOOL LP, based on different sessions Dee Dee had recorded for the label including an early version of the timeless Bacharach-David tune, ‘Alfie’ (cut in London), ‘It’s Not Fair’ (co-written by Philadelphia music masters Kenny Gamble and Thom Bell and produced by Gamble & Huff) and ‘Thank God,’ recorded with The Teaneck Mass Choir.

The original LP is reissued for the first time in its original form and includes three tracks never released on CD until now; this expanded edition of FOOLISH FOOL includes five non-album singles. With comments and reflections by her famous sister Dionne Warwick, notes are by SoulMusic.com founder David Nathan (whose first published interview as a music journalist was with Dee Dee in 1966).

Press:-“Northern soul fans have long been into the dancer Don’t You Ever Give Up On Me, and the Thom Bell-Kenny Gamble ballad It’s Not Fair is a strong example of the emerging Philly sound from 1968. The Waltz tempo Townsend-Warwick song That’s Not Love features a searing vocal too, and her second take on I (Who Have Nothing) is a cracker too. Sixties fans will love it”.