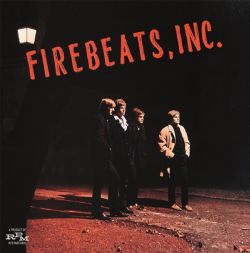 •    This first-ever legal reissue of their fantastic album is a belated opportunity to revel in one of Norway’s greats – one of the world’s greats. Twenty years before a-ha put Norway on the musical map, Firebeats, Inc. tried their damndest to do so. With an in-house songwriting powerhouse Yngve Bjerke, they were built for success. Yet opportunities to be heard beyond Norway’s borders were limited. A rarity for the era, Firebeats, Inc. was all original compositions.

•    RPM International’s expanded edition of Firebeats, Inc. adds their non-album singles and an outtake from the album sessions – collecting their complete 1964-1968 recordings.

•    With liner notes by Norwegian music expert Jon Vidar Bergan, this is the final word on Firebeats. Inc.. Bergan is the editor and co-author Norsk Pop & Rock Leksikon, the definitive encyclopedia of Norwegian popular music.

•    This CD is released 21st April and will not be shipped prior to this date.

2.    I NEVER KNEW THE SUN COULD SHINE SO BRIGHTLY AT NIGHT