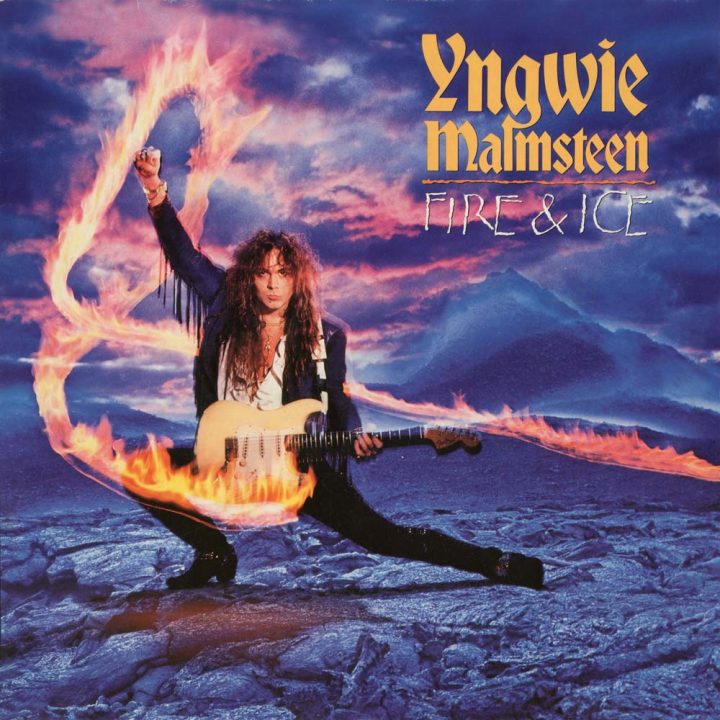 This new edition of FIRE & ICE by YNGWIE MALMSTEEN features liner notes from Classic Rock magazine’s Malcolm Dome, and has been expanded with the Japanese only bonus track, ‘Broken Glass’ plus the single version of the track ‘Teaser’.

In the 1960s it was Jimi Hendrix. In the 1970s it was Edward Van Halen. And in the 1980s, it was arguably Stockholm’s Yngwie J. Malmsteen that established new, exciting and innovative approaches to the electric guitar. Highly influenced by Ritchie Blackmore (Deep Purple, Rainbow) and Uli Jon Roth (Scorpions, Electric Sun), the young Swedish maestro developed a neo- classical style inspired by the likes of Bach, Paganini and Vivaldi, that set the tone for hard rock and heavy metal guitarists for the rest of the decade.

Moving to the States to play on the vinyl debut by Steeler, featuring Ron Keel, the teenage maestro was soon snapped up to play and write with Graham Bonnet (Rainbow, MSG) on Alcatrazz’s debut, “No Parole From Rock ‘N’ Roll” in 1983. After one studio album, plus the obligatory “Live in Japan” LP, Yngwie released his solo debut, “Rising Force”, in 1984. In 1988, along with Eric Clapton, he was the first musician to be awarded his own signature Fender Stratocaster.

Yngwie J. Malmsteen’s Rising Force soon began their ascent of the American charts, with the albums “Marching Out”, “Trilogy” and “Odyssey”, the latter recorded with another former Rainbow frontman, Joe Lynn Turner, followed by “Trial by Fire: Live in Leningrad” record in 1989.

Yngwie signed to Elektra Records in 1992, releasing his sixth studio album, “Fire & Ice”, that February. Featuring Göran Edman on vocals and Mats Olausson on keyboards, both of whom had made their debut with Yngwie on previous album, “Eclipse”, they were joined by Bo Werner on drums and Svante Henryson on bass. Produced by Yngwie, “Fire & Ice” was recorded at famed Criteria Studios in Miami, and at Abba’s Polar Studios in his native Stockholm.

This new edition features liner notes from Classic Rock magazine’s Malcolm Dome, and has been expanded with the Japanese only bonus track, ‘Broken Glass’ plus the single version of the track ‘Teaser’.

As part of his “World On Fire 2017” tour, Yngwie Malmsteen will be appearing at the O2 Forum Kentish Town on 2nd August, and at Skogsröjet, Rejmyre in Sweden on 4th August.