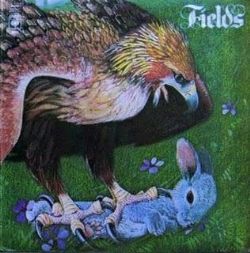 REMASTERED
FROM THE ORIGINAL MASTER TAPES

ESOTERIC
RECORDINGS are pleased to issue the first ever OFFICIAL UK CD edition
of the self titled album by FIELDS. When the first line-up of RARE BIRD folded
in early 1971, keyboard player GRAHAM FIELD formed this outfit with bass
player, vocalist and guitarist ALAN BARRY and KING CRIMSON drummer ANDY
McCULLOCH.

Although the
band failed to emulate the commercial success of FIELD’s previous group, the
sole album they recorded was a magnificent example of British Progressive Rock.

Much sought after
for many years, this official ESOTERIC CD edition has been re-mastered from the
original master tapes and features an essay by Sid Smith and interview with
Graham Field.