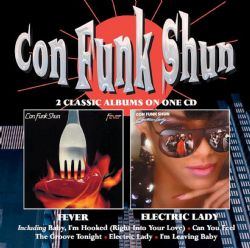 The “Fever” album also featured the single ‘Don’t Let Your Love Grow Cold’ but the stand out track on the album was the Club Classic ‘Can You Feel The Groove Tonight’. The “Fever” album was produced by Eumir Deodato who had also had a hit single ‘Also Sprach Zarathustra’, the theme from the movie 2001. He was also Kool & The Gang’s producer from 1979 to 1982.

“Electric Lady” also includes the singles ‘I’m Leaving Baby’ # 12 in the Billboard R&B chart and ‘Tell Me What You’re Gonna Do’ This album featured several producers including Maurice Starr, Larry Smith, Billy Osborne & the band also produced the track “Turn The Music Up”.

For the thousands who have bought into this series of Con Funk Shun releases, complete the set with these two great albums without delay.