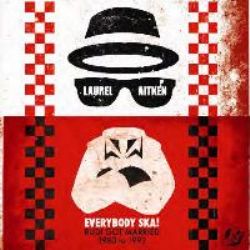 Released 11/10/10. Early in 1980, the British music scene was being
transformed by a Ska revival with the likes of the Specials, Madness,
Bad Manners and the Beat all storming the national Pop chart. In such
an environment, it was only natural that an array of labels sought out
the Godfather of Ska, Mr Laurel Aitken.

The eventual victors in
securing his signature were I-Spy Records, an Arista-owned imprint that
had recently been launched by Mod revivalists, Secret Affair. The label
initially teamed him up with British Punk band, the Ruts (masquerading
as the Unitone) to produce Rudi Got Married , the singer s first and
last official Pop hit.

Over the decade that followed, Laurel
remained at the forefront of the Ska scene, cutting a series of popular
sides assisted by a variety of acts, including the Potato 5 and the
Pressure Tenants – and it is the best of this material that comprises
this, the final Pressure drop CD collection to highlight the legendary
singer’s work.

Notice: id was called incorrectly. Product properties should not be accessed directly. Backtrace: require('wp-blog-header.php'), require_once('wp-includes/template-loader.php'), include('/themes/xstore/woocommerce/single-product.php'), wc_get_template_part, load_template, require('/themes/xstore/woocommerce/content-single-product.php'), do_action('woocommerce_after_single_product_summary'), WP_Hook->do_action, WP_Hook->apply_filters, woocommerce_output_product_data_tabs, wc_get_template, include('/themes/xstore/woocommerce/single-product/tabs/tabs.php'), wpb_new_product_tab_content, WC_Abstract_Legacy_Product->__get, wc_doing_it_wrong Please see Debugging in WordPress for more information. (This message was added in version 3.0.) in /home/cherryredco/public_html/wp-includes/functions.php on line 4986
Rudie Got Married / Honey Come Back To Me / Big Fat Man / It's Too Late / Let Me Love You Little Darling / Mad About You / Sahara / Everybody Ska / Skinhead / Sally Brown / Rude Boy Dream / Hey Little Girl / Since You Went Away / I Love You, Yes I Do / Looking In The Mirror / Don't Turn Your Back / Ringo The Gringo / Peggy Sue / Hitch Hike / Bartender
Reviews (0)